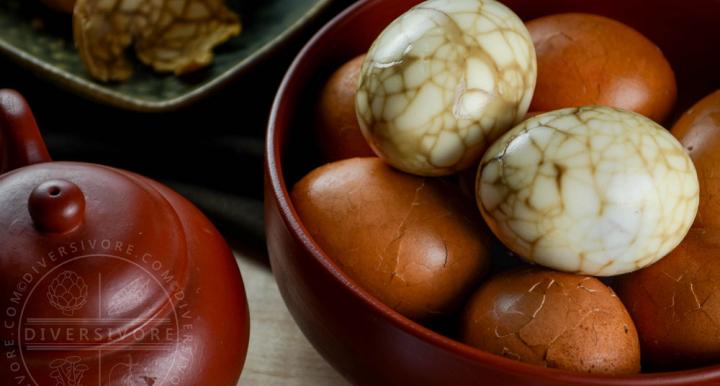 Tea eggs are simple things really – hard-boiled eggs, steeped in a marinade made with tea, soy sauce, and a variety of spices. The shells are intentionally cracked all over, allowing the marinade to seep in slowly and leaving an attractive network of dark lines on the egg white. The spice blend and tea choice varies quite a bit, but the general flavour profile is built around the classic Chinese five-spice mixture (anise, cassia, cloves, Sichuan peppercorn, and star anise).

Combine 3/4 cup marinade, 1 tbsp dark soy sauce, and 15 g (1 tbsp) sugar in a small saucepan. Bring to a boil, stirring to dissolve the sugar. Turn the heat down so that the mixture is at a low simmer and reduce the sauce by about half. Whisk in the glutinous rice flour, remove from heat, and set aside to cool. Drizzle the sauce over eggs, or place in a small dish for dipping.

Egg Doneness – this recipe uses a Japanese-style cooking method that yields a medium-set yolk typical of the eggs served along with ramen. This isn’t the typical method of preparation used to tea eggs, but I personally think it yields a tastier boiled egg in general (plus it avoids that chalky, greenish-yellow yolk that you get in over-boiled eggs). If you prefer a more firmly set yolk, increase the cooking time by 2-3 minutes.

Oolong tea – Oolong tea is a wonderful semi-fermented tea that’s extremely popular in Taiwan. If you can’t find a good loose-leaf oolong tea, you can try using 3 tea bags, or substituting a mix of black and green tea. Alternately, you can substitute a black or a green tea of your choice. Some people quite like green or jasmine teas with these eggs, though I personally find that they don’t stand out against the powerful spices quite as much. To each their own, and feel free to experiment. 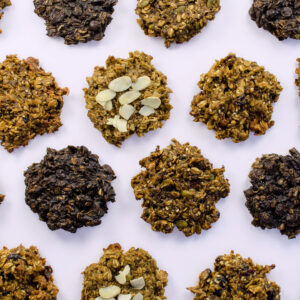 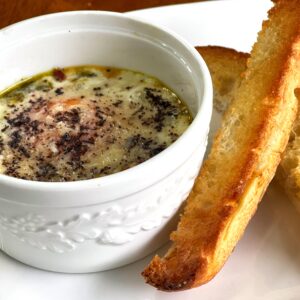 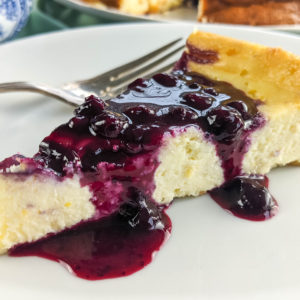 All Recipes
BC Egg COVID-19 Updates