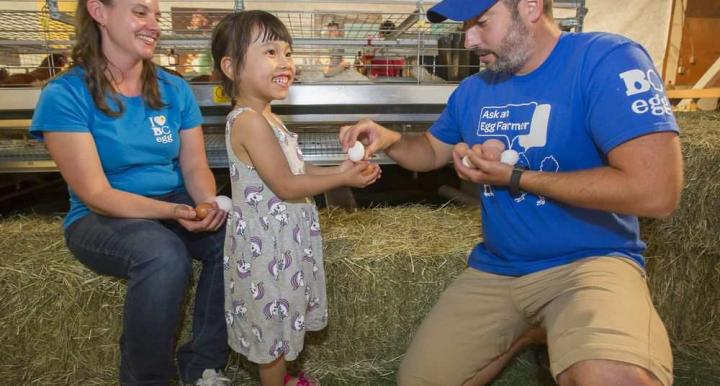 Where B.C. gets its eggs from is undergoing a revolution and visitors to the PNE this week can get a sneak peek.

Nestled in the red Farm Country livestock barns is a display set up by B.C. Eggs, the provincial egg-marketing board, of a new cage system for non-free-range or organic birds.

Within the next two decades every caged chicken on a B.C. farm will be re-housed. Just over five per cent of chickens in B.C. are already in the new cages, while 23 per cent of B.C. chickens already live cage-free, in free-run or certified-organic conditions. The board says B.C. has the highest percentage of cage-free hens in all of Canada.

“You’ll see they’ve got perches,” she said. “This cage has been designed so the birds can experience all areas of their animal-welfare needs.

“There’s at least six inches of perch space per bird, so all of the birds can perch at the same time if they like, there’s a scratch area because they like to scratch and a nest box at the end so they can lay their eggs in privacy.”

Abbotsford farmer Jon Krahn was on-hand to talk to passersby — all possible customers, of course — and he said he was a fan of the new cages, even if they did come with an initial cost. He said that when his barns are fully converted he’ll actually be able to almost double the number of chickens because of how the new cages take away bird waste — he’ll be able to have two levels of cages.

“We had birds upstairs, manure downstairs — but we’ve retrofitted the barns,” he said. The new cages have a conveyor system which carries away waste. It keeps everything cleaner, no smell in the barn, no flies.”

An average hen will lay six eggs per week.

And every egg provides the same nutrition, though, of course, variations in colour and flavour depends on feed; chickens raised inside will produce eggs that taste different from those that have outside access.

B.C. has 130 family egg farms, with three million chickens between them. That’s as many as some individual farms have in the “other countries” — read that as the U.S. — for the egg board, food security is of primary importance, Lowe said.

Feed is assessed for quality and the environments B.C.’s birds live in are checked three times a year for salmonella. A positive test from a sample taken of the walls where a flock of chickens lives means the whole flock is pulled from circulation.

“We really are a family farming community,” Lowe said.